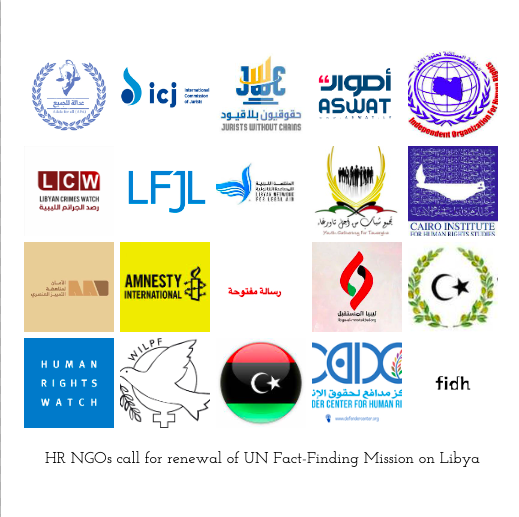 The undersigned organizations welcomed the establishment of the Independent Fact-Finding Mission on Libya (FFM) on 22 June 2020 by the United Nations Human Rights Council (HRC) through resolution 43/39, for a period of one year, to investigate violations and abuses of human rights and international humanitarian law, including any gendered dimensions of such violations and abuses, throughout Libya by all parties since the beginning of 2016, and preserve evidence with a view to preventing further deterioration of the human rights situation, and to ensuring accountability. In October 2021, the HRC renewed the FFM’s mandate for a period of nine months, until the end of June 2022. The FFM is scheduled to present its comprehensive report to the HRC on 6 July 2022.

To date, the investigatory work of the FFM has proven vital in establishing facts related to violations of international human rights law and international humanitarian law committed in in Libya since 2016. However, the work of the FFM is far from complete. Its renewal is imperative to continue investigating ongoing crimes and violations, to shed light on the human rights situation, and to send a strong message that the prevailing environment of impunity can no longer be tolerated.

Supporting pathways to accountability, including through international investigative mechanisms such as the FFM, is key to restoring the rule of law. In its interim report from March 2022, the FFM notably concluded that a culture of impunity was impeding Libya’s transition to peace, democracy, and the rule of law. With the indefinite postponement of presidential and legislative elections scheduled to begin on 24 December 2021, Libya is once again at a political stalemate that continues to fragment the country. Armed groups and militias exploit institutional weaknesses and commit crimes with impunity. The Libyan judiciary has largely failed to bring perpetrators of human rights violations to account, including in relation to the unlawful killings in Tarhouna, while armed groups and militias have subjected prosecutors and judges to abduction, threats, and other violence. In violation of the UN arms embargo, several States continue to provide support to various parties to the conflict, while thousands of foreign fighters remain in the country.

The FFM’s investigations indicated that “several Libyan parties to the conflict violated international humanitarian law and potentially committed war crimes.” While the systematic crackdown on civic space has escalated at an alarming rate, civil society actors, especially those working on human rights and peacebuilding, face constant harassment, defamation, threats, arbitrary detention, enforced disappearance, torture and other ill-treatment, and unfair trials. The FFM has also reported that women and girls in Libya face physical attacks, harassment, and a myriad of institutional and social obstacles that prevent them from fully enjoying their human rights and often limit their ability to participate in public life. In addition, the FFM’s work has shed further light on the violations committed against non-nationals, such as migrants, asylum seekers and refugees and against stateless people – whether at sea by coast guard forces, or by guards in detention centers and at the hands of traffickers and smugglers – and noted that they may amount to crimes against humanity.

For the severity and scale of violations, we underscore the importance of the work of the FFM and the need for its mandate to be renewed. Since its inception, the FFM has faced numerous obstacles, from UN budgetary constraints to the impacts of the COVID-19 pandemic. Following the extension of its mandate in October 2021, the FFM secretariat and support team only became fully operational in late January 2022, leaving it with less than five months to prepare its comprehensive report. Despite all these difficulties, the FFM has been able to publish two substantial reports that highlight the gravity of the human rights situation in Libya and the critical need for further investigations to put an end to the cycle of abuse and tackle widespread impunity.

Failure to renew the FFM by the Human Rights Council would send a message to unaccountable armed groups, militias and officials in Libya that Human Rights Council members and observer States, and more generally the international community, are not committed to finding pathways to accountability for past and ongoing violations and abuses, and that respect for human rights and humanitarian law in Libya is not a priority. Such an approach could lead to an escalation in violations and crimes, further entrench impunity, and undermine efforts to navigate the country towards political stability grounded in respect for the rule of law.

In this context, we strongly urge your delegation to ensure the renewal and proper resourcing of the FFM on Libya at the upcoming session of the HRC, with an extended mandate of at least one year to enable it to continue its vital work.

With Assurances of our Highest Consideration,